Creating a space for ‘performative’ jewellery within the context of a project developed and performed by musicians is a strange and bewildering experience.  The brief for the artists was to create work that was “self-sounding” (e.g. didn’t need to be struck by another object to make a sound) and could be “worn”. The work would never be displayed outside of the actual performance but would appear only when they were “performed”. Seeing them used in this way by the performers was mind-blowingly amazing.

It was as if these musicians had been playing the beads, cups, cymbals chain, steel plate for years! It got noisy and wild! It was fantastic!  The musicians were amazed by the generous loaning of the work and it was a great first step of solidifying a dynamic, interdisciplinary relationship.

The first performance of the Opera of Objects was a ticketed event in a concert hall.

The audience entered at stage level and then climbed the stairs to look down at the performers. In front of the setup instruments, there were three tables containing the objects that formed the primary direction for the opera. These objects were separate from the necklaces themselves, which were stored elsewhere on the stage. From our vantage point, we could see the musicians moving objects on their tables very clearly.

The first act was primary piano, percussion and oboe.

The second act incorporated objects from their lives that the musicians had brought with them. The text was read by the musicians and as well as the writer, who was stationed within the audience. There was an amazing piece where all three musicians sat down at their laptops. Erik has developed an app where the act of typing is transformed into pre-recorded sounds. They read Craig’s poetry while typing the lines onto their laptops. As they typed, their instruments re-interpreted and played the poetry. The poetry had written its own score.

For the Finale, the musicians, all put on necklaces. They played their own instruments, the necklaces, each other’s necklaces. It was wonderfully active, percussive, and chaotic. The jewellery was brought to life with skill and dexterity that I have never imagined. It was awesome.

The show was over, the audience walked through the works on the stage. The whole thing was packed up.

The next morning, the performers and families drove three hours into the bush – to the most amazing Piano Mill. There, in the outback there is a purpose-built performance space. The works were laid out on the stage. The audience arrived. The performance began – in the most stunning setting.

It was fabulous to go down the rabbit hole of artists working at such a high level in a different field. The Opera of Objects was a musical collaboration, so it is a growing process on how the jewellery can sit in its own right. Considering the features of the jewellery/objects that work for musicians was a new approach. Volume or amplification was a function that was a new dynamic to consider It was a wonderful experiment!

In an effort to spend less time online and more time in the real world, I have taken a break from this blog.  You can find me over  in instagramland:

Well, it is really Liesbeth Den Besten getting the press…. but still.

This special edition of Overview includes 2000 collectors edition newspaper copies available alongside the Wunderruma exhibition, opening right now at Galerie Handwerk in Munich. Thanks so much to all our supporters who donated funds and purchased advertising space to help this happen.
Issue #16 WUNDERview

This is what I am reading these days.

How fun could reading a doctoral thesis be, you ask?  Very.
This lady, wrote one good book.

A Rainbow Reader, is available from Clouds Publishing (clouds.co.nz).

Observation:  I say reading, but it is more clandestine than that. It all occurs in secret because if my children see this book, they go crazy.  I have had wrestling matches with the 9 month old over the luscious multi-coloured spine.  And when I left in on the bedside table I had to retrieve it from the back of the couch where the 3 year old hid it in his “turtle nest”.  I am not sure which is more mouth-wateringly, appealing to these small humans, an ipad or A Rainbow Reader.  I hope the reader.

after a brief hiatus a la maternity style

I am honored to announce that my work will be included in the 2013 Beijing International Jewelry Art Biennial. Sadly, I am not going to be as well traveled as this work and anxiously await reports back on the show.

Thanks for reading
It has been such a pleasure to collaborate with Judy on this show! 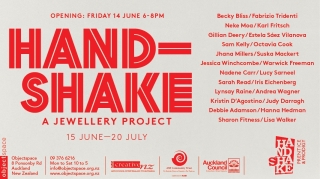 The Handshake exhibition is the culmination of the Handshake mentoring project that began in 2011 involving twelve, then emerging, New Zealand-based jewellers. The project initiated by jeweller, teacher, and jewellery activist Peter Deckers, has provided the mentees with the opportunity to work with an internationally renowned artist or jeweller of their choice, as a mentor.
The role of the mentor was to assist the mentee with establishing an ongoing practice that would extend beyond the duration of the project and provide professional support and advice during the process of them developing works for a series of Handshake exhibitions staged in Australia, New Zealand and Germany. While earlier exhibitions  focussed on the mentees, the Handshake exhibition at Objectspace presents works by all the participants and highlights the collaborative process and unique qualities of the relationships between the pairs.
The Handshake website (http://handshakejewellery.com) records the progress of the Handshake participants via blogs that chart the development and exchange of ideas which occurred through a mixture of email, Skype, and studio visits. A recently published bookHANDSHAKE – 12 contemporary jewellers meet their hero collects text and images from participants and features an essay from leading international jewellery commentator Benjamin Lignel. The book is available for purchase at Objectspace.
In the final phase of this Handshake project each of the current mentees has been given the opportunity to select a new recent graduate, whom they will mentor for of a year,expanding on the ever increasing circle of learning and contributing to the dynamic flow of shared experiences. These graduating mentees- soon- to- be- mentors are the most valuable jewellery resources generated by Handshake.
Participants in Handshake are as follows:
Becky Bliss / Fabrizio Tridenti
Neke Moa / Karl Fritsch
Gillian Deery / Estela Sáez Vilanova
Sam Kelly / Octavia Cook
Jhana Millers / Suska Mackert
Jessica Winchcombe / Warwick Freeman
Nadene Carr / Lucy Sarneel
Sarah Read / Iris Eichenberg
Lynsay Raine / Andrea Wagner
Kristin D’Agostino / Judy Darragh
Debbie Adamson / Hanna Hedman
Sharon Fitness / Lisa Walker
Thanks for reading

If you missed Schmuck Munich,  and you happen to be in lovely Legnica, Poland then you can catch my work in Schmuck 2013 from 30th April – 8th June. 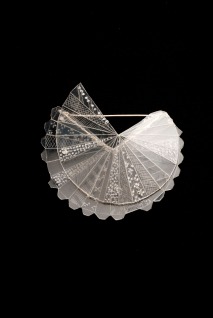 MakerWearerMatchmaker is a collaborative jewellery project losely based on my very own Broach of the Month Club that will take place in Sydney during ArtMonth, March 2013.

Read more about The Project.